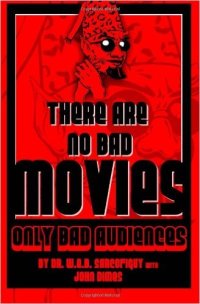 I recently finished reading “There Are No Bad Movies (Only Bad Audiences)“, by W.E.B. Sarcofiguy (aka John Dimes). I met the author at a panel at Awesome Con 2015, where he had an interesting opinion about movies. Learning about his work, I was quick to order the book and look deeper into this concept of “no bad movies”.

The core idea is all about perspective; a movie is only as “bad” as you let it be. “Bad” is subjective, and what is horrible to some may be enjoyable to others. This is a legitimate concept, found in everything from culinary tastes to artistic criticism. The reason it’s important to apply this to cinema is because of the vehemence with which many movie-goers approach movies. There is such passion, particularly among the “nerds”, that a movie is often disregarded or attacked for trivial and subjective reasons. The advent of the Internet, allowing people to post to global audiences (not to mention anonymously), doesn’t help with this attitude.

Sarcofiguy goes further than saying, “it’s all in your mind”, by pointing out common fallacious criticisms by the ever-annoying armchair critics. I’m not going to discuss them fully here (I want you to buy the book), but several key ones felt important.

All of these ignore the movie itself, and instead try to qualify the piece based on other artwork, personal tastes, and arrogance.

On top of this, Sarcofiguy mentions one more very important fallacy: “the movie was made for me, the fan.” Movies are artwork, and while some may certainly want to cater to audiences to make money, many more are beholden to no one but their own vision. If directors have been known to leave projects because the producers were trying to change their piece too much, why would they stick around and cater to audiences? The only person to blame if you feel slighted or offended by a film is yourself.

Now, one area I slightly disagree with the author is the open-ended statement “no bad movies”. Oh, there certainly are “bad” movies based on certain criteria: bad acting, bad editing, bad scoring, bad effects, etc. There are movies that will certainly go down in the annals of cinematic history as among the “worst” ever made.

However, like Sarcofiguy remarks, the final result is completely subjective and these movies may be “good” to certain audiences. From movies that simply cater to specific audiences (“Battlefield Earth”) to those that attract the opposite audience (“Reefer Madness”) to those that are so-bad-they’re-good (“Plan 9 from Outer Space”)… these movies can still be enjoyable. It’s all about the perspective you are bringing to the theater or couch when you sit down.

Now, one warning should you pick up this book (which I highly recommend you do). The writing style in it is rather… unique? Beyond merely train-of-thought, it’s also rather unconventional (and unprofessional). Written more like the ramblings of a blog or social media post, it’s full of misspelling, poor grammar, slang, and “in character” remarks. The sad part is, the very people the concepts should reach will likely focus on this writing style rather than the content. Kind of like the movies they’re always criticizing…

In the end, John Dimes diatribes about movie critics (especially in this age of Internet rants) holds no small ring of truth. Whether a movie is enjoyable is totally up to the viewer, not the movie itself. If you change your perspective and avoid some fallacious thinking, you may find much more wonder out there in the strangest places. Now, if you excuse me I need to figure out what today’s afternoon movie will be: Ultraviolet or Battleship.