I’ve posted on social media sites my praises and criticisms for Star Wars: The Force Awakens. They mostly center on it being a safe movie, attempting to rehash the Original Movie while staying as far away from the Prequels as possible. This created something that was fun, nostalgic, and enjoyable… yet also lacking in “oomph” and much new.

My biggest complaint, however, stemmed on the sheer lack of technological diversity, specifically starships. The choice to mostly focus on minor updates to the two classic starfighters (X-wings and TIE fighters) soured what could have been awesome space battles full of new sights (not to mention potential collectibles/toys). Given both the time span of the movies as well as the precedent set for changes in technology, the lack of ship diversity felt out-of-place and disappointing. To make my point, let’s look at the bevy of starships between the OT and Prequels. (Note: I will only cover those ships originally in the movies; any special edition add-ons will not be included in my counts.) 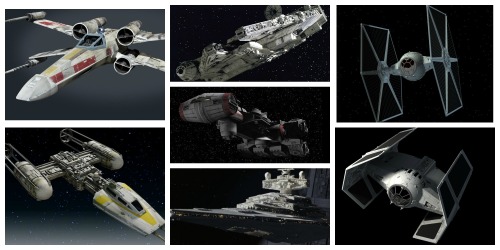 As you can see, the original movie started us off with a nice, but not overwhelming, variety of interesting ships. We opened with two vastly different capital ships, moved on to an interesting freighter, and then had a big battle involving two fighters, a bomber, and an elite prototype. This is where Lucas and McQuarrie shined, giving us cool aesthetics that hadn’t been seen before, from the semi-familiar designs of the X-wings to the alien look of the TIEs. 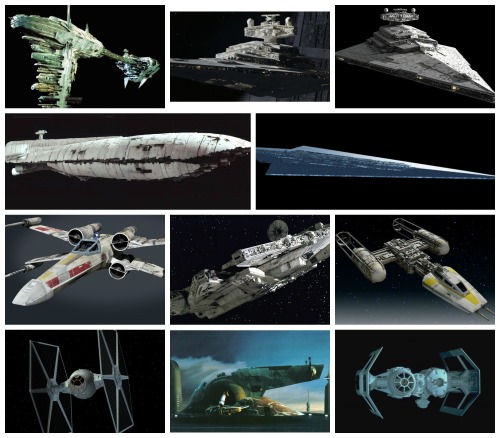 The most story-heavy of the movies still manages to present a variety of technological sights for our enjoyment. They retain the core starfighters and even add a new one: the Empire’s own bomber. They also show three new capital ships and add another that’s a minor variant on the original Star Destroyer. Finally, they provide the opposition to the famous Millennium Falcon, with Boba Fett’s iconic starship. That’s not even getting into the variety of airspeeders and walkers in their own wonderful scenes.

Possible the most starship heavy of all the movies and one of my favorites. They bring in all but one of the previous starfighters and add a whopping three more: two interceptors and a heavy fighter. They also create an iconic shuttle, bring in all the classic capital ships, and add a new one as well as a variant Star Destroyer. There is so much eye-candy here and it added so much to the universe that you wanted to play (in the games) and collect (among toys and models). 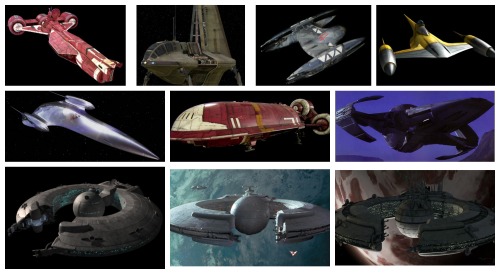 Now that we’ve covered the variety of ships over the 4-year timeline of the Origiinal Trilogy, we travel 30+ years into the past. At this point we’re greeted with a brand new variety of ships, which makes sense given the difference in technological aesthetic. Some are brand new and others provide a “missing link” to those further in the story. You have two different starfighters (including a droid) and a ship that lays the groundwork for the TIE series. The shiny Nubian style and several variants of Trade Federation provide something unique to the era, where as shuttles and cruisers are more reminiscent of McQuarrie’s OT designs.

Focusing far more on plot build-up and ground scenes than space battles, they still managed to add plenty of new things here. Two new starfighters, one of whom was the predecessor to the A-wing, and a unique personal craft gave some nice flavor. We also saw the beginning of an OT favorite, two more Nubian ships, another similar freighter, and the ancestor of the Star Destroyers.

At this point we’ve come full circle and ships begin to reflect the OT. We see predecessors to X-wings, A-wings, TIE fighters, and Star Destroyers. Although we’re lacking in large or personal starships, we have a fair diversity in starfighters and capital ships. 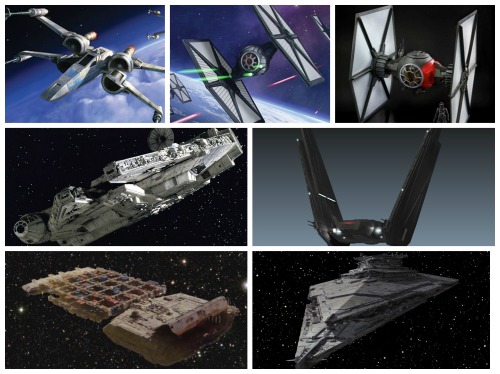 Now, 30 years after Ep. VI, we find ourselves at my main problem. Sure, with three starfighters, two large ships, and two capital ships it seems diverse (or at least as much as Eps. IV and III). Yet, all three starfighters are just variants on two OT ships. We’re not even talking something evolved from these ships, they are the same except for some minor aesthetics and coloration. In fact, the two “new” TIEs are so similar in the movie, you’d have to read books to know they were different types! Then you have a return of an iconic OT ship leaving only three actually new ships: an awesome new shuttle, the latest evolution of the Star Destroyer, and a random heavy freighter.

Yet, 30 years after Ep. VI, when aesthetic and culture should have changed just as drastically, what are we greeted by? Three starfighters that are just minor variants on OT ships, a return of an OT ship, the latest iteration of the Star Destroyer, and only two truly unique creations. This not only makes no sense based on the timeline, but also just seems lazy on behalf of the designers. Surely at least one new starfighter would have been designed during that period. Yet, instead, we’re presented with a couple of fighter battles that have less diversity and interest than the first 1977 movie!

So, while I enjoy the movie overall, my biggest criticism remains that they just didn’t seem to try when it came to interesting and unique technological aesthetic. Like the plot, it was just a safe rehash of OT stuff, playing off nostalgia and lacking in much fantastic. Hopefully we’ll see more in the next movie, although the sneak peeks showing an A-wing cockpit have me concerned they’re just going to stick with rehashes rather than risk something new and cool. (Not to mention, why an A-wing would still be used given they’re at least 40 year-old technology at that point, is beyond me.)

Please, Disney and Star Wars. Channel a bit of Lucas and McQuarrie when it comes to designs. I’d like a little more “oomph” and excitement in this new trilogy.