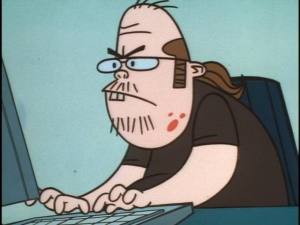 Before I start this, let me emphasize the difference between “Geeks” and “Nerds”. Geeks are hobbyists, often obsessed with some popular entertainment or fiction. Geek culture is at a high point right now, with comics, fantasy, and science-fiction all acceptable (and profitable) parts of modern society. Even normally marginalized practices, like gaming and cosplay, are not nearly as ostracized as they once were. This discussion is not about geeks or “geek culture”… it’s about nerds.

“Nerd” has many different definitions, but in most of them it’s recognized as someone who is socially awkward. Psychologically, this could be understood as a lack of social intelligence and/or emotional maturity. This means many nerds often suffer from a lack of self-awareness, awareness (or acceptance) of social norms, lack of adaptation to social change, maladaptive emotional development, poor emotional control, or any combination of these psychological issues. Many nerds pursue geek hobbies… but not all geeks are socially-inept like nerds. Thus my distinction between the larger “geek culture” and the more defined “nerd culture”, even if the two are often intertwined (or stereotyped onto each other).

Prior to the advent of the Internet, nerds most likely were limited by their geographical area. Certainly there have been conventions, magazines, etc. for decades that allowed like-minded individuals to gather, but most “nerd cultures” would likely have developed among local social groups. If someone practiced negative social or emotional behaviors, they more easily faced negative consequences that would punish the inappropriate behavior. This might have led to changes in behavior or simple exclusion of the individual, but there was minimal reinforcement for the behavior in question.

The Internet, especially into the 21st century, changed all that. Suddenly like-minded groups could discuss similar perspectives over great distances. Social media allowed real-time sharing, and support, of each other’s perceptions, cognition, and behaviors. Socially-inept groups that might have been limited to a half-dozen friends in a county suddenly exploded into hundreds or thousands. These negative social and emotional perspectives were socially reinforced by similar individuals. Worse, with the acceptance of many geek hobbies as mainstream pursuits, suddenly these groups felt their perceptions and opinions were valid in mainstream society.

So, today “nerd culture” is the source for such indefensible movements as GamerGate, Sad Puppies, and other groups that tout themselves as promoting ethics when they are doing anything but that. Decades ago if someone had spouted something misogynistic, racist, or similarly inappropriate in a geek group, most often they would have been ostracized. Now, though, they have the sounding board of forums and blogs that only reinforce these maladaptive cognitions. It’s like giving a child with a violent, destructive temperament a lighter and letting them loose with other psychopathic children.

It’s a sad case when things so positive, including the creativity of geek pursuits and the Internet itself, can be turned into something so socially and psychologically destructive. Sadly, these individuals not only ruin the quality of life for the majority but also will never receive the mental help they so desperately need. We simply need to strive to create a new balance among nerd and geek cultures, to once more teach the socially inept and emotionally immature proper behavior.